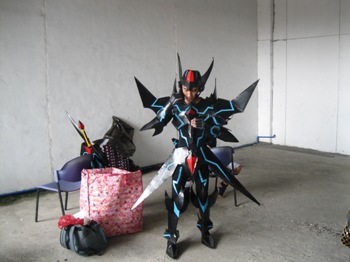 The Creartume Team, a.k.a. Costume Philippines people has successfully co-sponsored the Otaku Encore: Cosplay Idol 2012 which happened today @ Waltermart Sta Maria Bulacan. We were given our own exclusive booth for the event proper and so it is where I decided to place my small laptop to post a facebook update. I also took pictures of the event highlight from the venue while there were no people yet to the registration table where you can find some of the cosplayers trying to sign up for the registration and to dress up.

Catching some early bird participants to the contest launched by NCPH, a.k.a. Naruto Cosplayers Philippines, I wandered around and took some pictures of the event and was proud to have attended and helped a bit talking it out with Dave Delano regarding a possible sponsorship earlier, a couple of weeks ago. It was Naruto’s birthday last October 10 and part of the celebration and cosplay contest is the highlight on the celebration of the idol anime character plus it’s the 2nd year anniversary of Naruto Cosplayers Philippines (NCPH). There will be prizes to be given to the deserving cosplay artists based from a set of categories. Overall, the event was really high with energy. Curious audience flocked in the event center to take pictures with the exciting cosplay costume of popular anime, manga, cartoon (etc) characters. Some were even from popular gaming characters made almost real and alive with the get up of the participants.

For those who were contestants, participants, avid onlookers, interested cosplay costume buffs, anime lovers, manga lovers and those who registered in the event and saw the whole set up, you can make your own recollection by visiting our official Facebook Page where we uploaded a set of photos / pictures on the event here – http://www.facebook.com/media/set/?set=a.452889918082781.102330.253076071397501&type=1. You may also watch our self-made video below.