Posted on September 23, 2012 by costumemakers 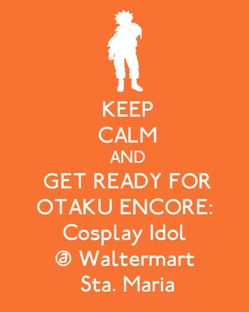 Brace yourselves as one of the leading and exciting events in Otaku Encore is about to happen! Naruto Cosplayers presents – Cosplay Idol @ Waltermart Sta Maria. Dress up now for this gig and join the contest to win exciting cash prizes plus get to mingle with common like people in the cosplay Philippines arena.

REGISTRATION FEE: P50.00 (for competing cosplayers. Part of proceeds will be donated to the Philippine Animal Welfare Society – PAWS).

1. Every cosplayer who enters the competition will get a change to win the COSPLAY IDOL AWARD.
2. The total points to be given for the cosplay competition will be 150 points. The additional 50 will be used to compute for the Cosplay Idol category.
3. A cosplayer who wins in the Cosplay Idol Award can no longer win for the Individual Cosplay Award.
4. You can perform as a group and win in the COSPLAY IDOL COMPETITION as long as their individual character average plus their collective talent will be the highest. Meaning isa lang ang bibigyan ng score sa talent ng buong group.

All members of the group performance should register and once they win as COSPLAY IDOL they win as a group and no member from that group can win in the other categories.

2. There will be a pre-registration of participants.

3. All pre-registered cosplayers are required to confirm at the venue from 11:00am to 2:00pm.

4. Each cosplayer will be given up to 3 minutes to perform.

5. Individual cosplayers can use human props and there is no limit to the number of human props as long as their performance will not exceed 3 minutes. A 10 point deduction will be made for every minute in excess. There will be a timekeeper assigned at the event to monitor this.

6. Acceptance is on a FIRST COME-FIRST SERVED basis.

7. Only 150 cosplayers will be accepted.

1. Dangerous stunts, metal props and other dangerous objects or props will not be allowed.

2. In case of destruction or damage due to a contestants cosplay act, the cosplayer will be the one to answer for the said damages.

3. You can cosplay any anime, manga, game or movie character.

4. No member of the staff or organizing committee will be allowed to participate in the cosplay event competition.

5. The decisions of the judges are final.

6. If you have any complaint please watch out for our feedback form or drop it at the suggestion box/feedback box that we will deploy during the event.

1. Judges will be announced during the event.

2. There will be two (2) resident judge for NCPH Cosplay Idol and two (2) guest judges for the event.

3. Criteria for judging will be as follows:

• There will be a designated baggage area during the event>
• Baggage area will only be for cosplay competition participants
• Please remove any gadget or money from the items you will put in the baggage counter.
• The event organizer will not be responsible for any items lost.